Dome-shaped or cyst-like radiopaque lesions are commonly observed on the wall of the paranasal sinuses on simple radiographs, including Waters’ and panoramic views, computed tomography (CT) and magnetic resonance (MR) imaging of the paranasal sinuses and brain. They are usually asymptomatic and found on routine radiographic examination taken for other reasons. They are well recognized as mucosal cysts arising from the wall of the paranasal sinuses (PSMCs), and their reported prevalence in the general population varies from 3.2% to 35.6% (1-4). Recently, imaging technologies have been dramatically improved, and more sensitive techniques such as CT or MRI have become widely used, which result in an increase in their prevalence.

The clinical implications of PSMCs remain uncertain. PSMCs have generally been accepted as benign, but there is debate as to whether they are an entirely benign and ignorable finding or a kind of sinus pathology. In addition, the risk factors for the development of PSMCs still remain unclear. Some authors have reported an association between PSMCs and various clinical symptoms, such as headache, nasal obstruction, facial pain and rhinorrhea (5-6). Moreover, it has been reported that chronic sinusitis plays an important role in the development of PSMCs (4,7). However, many patients are asymptomatic in a clinical setting, and a recent study suggests that the occurrence of PSMCs is not associated with sinus or dental diseases and do not require surgical resection. 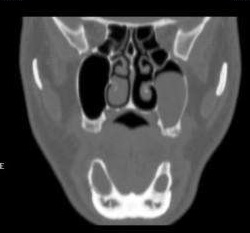 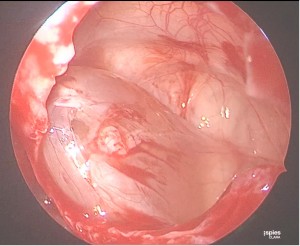 The size of PSMCs varies according to their location, and it may be possible that the sinus outflow tract is more frequently obstructed with increasing size. However, the correlations between the size of PSMCs and the patency of the sinus outflow tract/subsequent sinusitis have not yet been investigated in a large population study. There have been few reports regarding the associations between other medical conditions, such as allergic rhinitis, and the development of PSMCs. Moreover, the link between smoking, known as an important risk factor for many other sinus diseases, and PSMCs has not yet been examined.

Since PSMCs are commonly found on radiographs, it is necessary to identify the characteristics of PSMCs and to evaluate the risk factors for the development of PSMCs. However, previous studies were limited by a small sample size, and studies with a large population have not yet been conducted. Therefore, we evaluated a large series of brain MR images to determine the current prevalence and nature of PSMCs and to investigate the risk factors for their development.